Polymer composites are materials that you will have come across in your day to day living, whether you have realised it was a polymer composite or not. There are so many benefits and uses for polymer composites, and once you know more about them you will realise that your life would not be as comfortable without them.

But first, we need to understand what a polymer composite is, so let’s break down those two words.

A polymer is created by a chemical reaction that joins lots of the same type of molecule together to form one long molecule of a new substance. 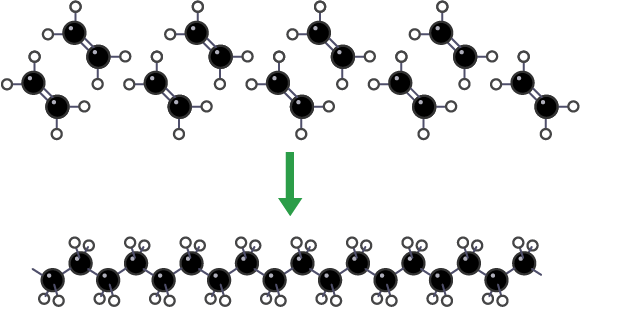 Ethene molecules join together to make long molecules of poly(ethene)

Polymers often have similar traits such as:

Examples of polymers include:

A composite is a very simple term and it literally means a material that is composed of two or more materials. For example concrete is a (very common) composite because it is made by combining materials such as cement, gravel and sand. The consistency and the qualities of the cement will depend on what ratios you combine the ingredients together in, and under what circumstances you make it. Composites are very useful and clever materials because they can combine the benefits of two (or more) materials to create a material that has the benefits of both and even loses some of the defects or cons. For example concrete is waterproof, whereas sand isn’t, and concrete can be molded, which gravel and concrete on their own can’t.

So now we know what the two individual words mean, we can begin to understand what a polymer composite might be.

The modern composites we build with today are usually made of two components, a fiber and matrix. The most common fibers that are used are glass, carbon or polyethene. Most people will have heard of fiberglass as it is a common household name. The most expensive by far is carbon-fibre as it is so costly to produce and takes millions of dollars of money to even build the specialist machinery to produce it.

The other part, the matrix, is usually a thermoset like an epoxy-resin, or a polymide.

The fiber is embedded in the matrix in order to make the matrix stronger. Fiber-reinforced composites have two things going for them. They are strong and light. They’re often stronger than steel, but weigh much less. This means that composites can be used to make automobiles lighter, and thus much more fuel efficient. This means they pollute less, too.

Polymer composites have been manufactured since the very start of the 20th century when inventors began experimenting in order to produce plastics. The first every synthetic fabric was produced in 1905 and was called ‘bake light‘. While at the time the inventor, Leo Baekland, had been focused on creating synthetic plastic to make storage containers, much research was put in from other bigger industries such as the boating, contstruction and aircraft industries. It can be easy to see why they would want to further improve a plastic substance that was strong, light, and so much cheaper to produce than other composites. Economically it made sense to invest in the development of polymer composites.

Moving on from the first introduction of synthetic plastic over 100 years ago, there has been much development in the uses of polymer composites. In June 2013, KONE elevator company announced Ultrarope for use as a replacement for steel cables in elevators. It seals the carbon fibres in high-friction polymer. Unlike steel cable, Ultrarope was designed for buildings that require up to 1,000 meters of lift. Steel elevators top out at 500 meters. The company estimated that in a 500-meter-high building, an elevator would use 15 per cent less electrical power than a steel-cabled version. As of June 2013, the product had passed all European Union and US certification tests. 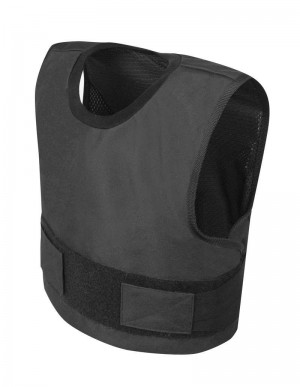 Other uses include the known brand ‘Kevlar’ which produces bullet-proof vests (pictured above) made of polymer composites. As you can see, not only do they help you to fly, or sail the ocean, or hold your lunch, polymer composites can even save your life.

Fibre-reinforced plastics are perfect for any product or design plan that demands lighter materials, precision engineering, finite tolerances, and the simplification of parts in both production and operation. A moulded polymer artefact is cheaper, faster, and easier to manufacture than cast aluminium or steel artefact, and maintains similar and sometimes better tolerances and material strengths.