What is Carbon Fibre?

Have you ever heard of Carbon Fibre? If you have any interest in the materials used in the automotive industry, in the manufacturing of racing cars or bikes, of golf clubs and other sporting equipment, you will no doubt have heard of Carbon Fibre, and how it is improving the quality of the product in all of these industries. Long gone are the days where Carbon Fibre was such an expensive material that it could only be used in the aerospace industry.

But what exactly is Carbon Fibre and why does this material seem to be popping up everywhere?

Put simply, Carbon Fibre is made of thousands of  long thin strands of material mostly made up of Carbon atoms (no surprises there). It is an extremely thin material, the fibres being about 5–10 μm in diameter. But even though it is thin, it is extremely strong, and is also much lighter and less dense than most other materials. It starts becoming clearer why Carbon Fibre is an extremely effective material to use in the production of items that require strength or speed.

There are many other individual qualities of Carbon Fibre versus other materials and for a full list please see here.

So how then is it made? To produce Carbon Fibre, the carbon atoms are bonded together in crystals. These are, more or less, aligned parallel to the fibre.  The crystal alignment is what gives the fibre it’s high strength-to-volume ratio (making it strong for its size).

Several thousand Carbon Fibres are bundled together which can be used by itself, or woven into a fabric. 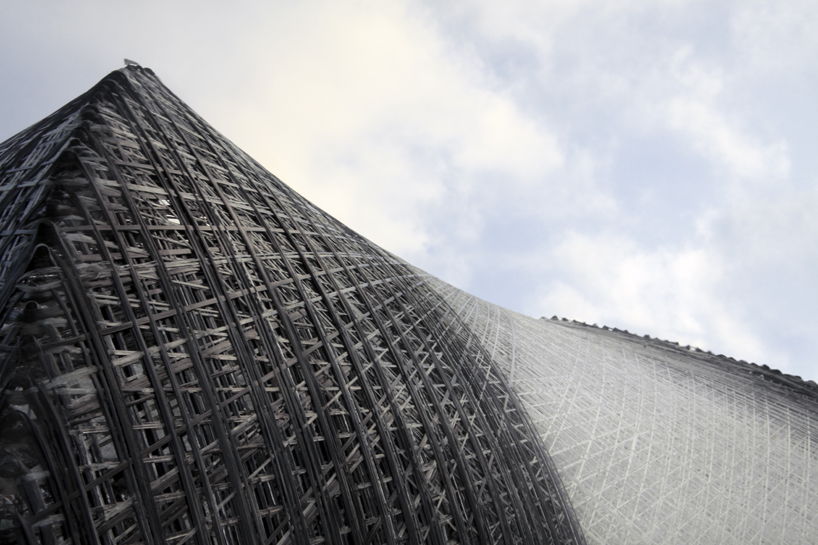 The production of Carbon Fibre is an expensive and complex process, and each carbon fibre manufacturer has their own techniques for producing their product. The exact science and techniques of this production is a trade secret and is heavily guarded by each company. It is not surprising then that most people have heard of Carbon Fibre but are unsure of how it is made.

Equally, the equipment used to make Carbon Fibre is extremely expensive and is often bespoke to the specific technique of the individual manufacturer: just the equipment alone to produce the fibre can start at around $25 million. That doesn’t include all the research hours and knowledge base put into making a high quality Carbon Fibre product.

For a detailed step by step explanation of the manufacturing process of Carbon Fibre please see here.

One way to use Carbon Fibre is to combine it with another material such as plastic resine for example, and this is called a composite. This combination makes the material cheaper to produce and widens the product base it can create. For more information on composites and how they are increasingly being innovated and used please see here. One of the more common composites is known as Carbon Fibre Reinforced Polymer, or CFRP, and is commercially produced for many industries.

If you are interested in the science behind Carbon Fibre, or for an indepth look at the chemistry, please see here.

How Can It Be Used?

We know that Carbon Fibre is lighter, less dense, and stronger than almost any other material. It is also expensive to produce, so how can it be used to in a way to make it most useful for products where value for money is important? How can Carbon Fibre be a viable commercial product and cost effective?

The short answer is that it hasn’t been easy. Companies like 3MB have worked tirelessly in their labs and with worldwide experts to keep improving this unique product. Thanks to the way it is produced, each company’s Carbon Fibre product is individually recognisable, and its production techniques are a closely guarded secret, considered intellectual property.

Due to the beneficial properties mentioned above, one of the recent and exciting new products made from Carbon Fibre manufactured by 3MB is the new improved edition of the Snow Bike, the YETI SNOWMX.

Thanks to the magic ingredient of the Carbon Fibre concept created by 3MB, this Snowbike can amass greater speeds, push further and reach higher than ever before. It is an astonishing 16kg lighter than its main competitor. The YETI SNOWMX took two and a half years of working with the best manufacturers from around the world to produce, but it would not have been possible without 3MB’s Carbon Fibre concept. The strength of the concept is an incredible low weight ratio combined using aerospace processes calculated by professionals.

We mentioned above that Carbon Fibre is used in many industries, one of them being the manufacturer of racing cars, where ever greater speeds and less weight can make the difference between a triumphant victory or coming last. Of glory or failure. A full Carbon Fibre racing car is no longer even a dream, it’s a reality. If you don’t happen to be a professional racing car driver, it is also used in supercars and if you would like to buy one of the world’s most expensive then have a look at our list here.

Now we know more about the qualities of Carbon Fibre and how it is being produced to be less expensive and more commercially available, the benefits of using it in a wide range of fields are obvious. Take for example its use in the construction industry. It could make houses that are strong enough to resist tornadoes or earthquakes, to make bridges that are stronger and safer, or to repair older structures to make them safe and habitable once again.

This product not only makes your bicycle go faster, but it can save lives, and considering that Carbon Fibre is thinner than a human hair, it is an incredible material indeed.