Everything About Fiberglass: Manufacturing, Benefits and Applications

As the modern age developed, so did man’s understanding of the world we lived in and the materials that were available to us. Humans have always interacted with their environment to their advantage. From first inventing the wheel to assist with transporting goods and people, now we build rockets that transport people and goods into space.

One thing has always been the same though: we are always trying to make improvements and discover new things. The use of composite materials in all industries is a wonderful example of this modern human ingenuity.

A composite material is a simple concept: it is made by combining two or more constituent materials with significantly different properties. When they are combined, they will produce a composite with new properties different to either individual material. The advantages of this are obvious. By combining two materials, you can create a new material that has the best elements and strengths of both, without the individual weaknesses of the original materials.

Fiberglass is one of the most well known of all the modern composite materials and is used in a wide range of industries and applications. The name ‘Fiberglass’ may be misleading though as this term is actually the common name for the composite of ‘fiber-reinforced plastic’ using glass fiber. So actually fiberglass as we know it today is a composite itself but not to be confused with one of its materials: glass Fiber.

Fiberglass can even be substituted for the wheel as it helps to transport people and goods through its application in the production of aircraft, boats and automobiles. Due to its flexibility and low cost to produce, it is also a fantastic material which is used to build larger household items such as bathtubs and pools.

Production of the fiberglass that we use today was actually discovered by accident in 1932 when Games Slayter, a researcher at a Fortune 500 company based in Ohio, USA, directed a jet of compressed air at a stream of molten glass and produced glass fibers. However this was only the beginning and it took a few more decades before anything like the Fiberglass we build with today was produced.

The process used to manufacture fiberglass is called pultrusion. Large furnaces are used to gradually melt all the ingredients together into a liquid: silica, sand, limestone, kaolin clay, fluorspar, Coleman, dolomite and other minerals.

The second part of the process is to then mould it into its desired outcome, which can be either as glass fibers, or woven into a blanket as seen in the picture below. 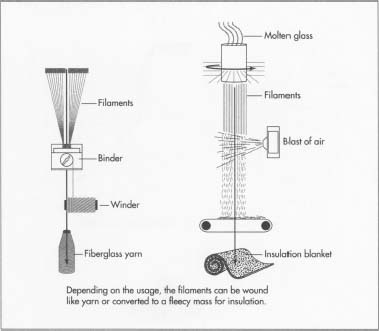 Fiberglass has many benefits that make it the perfect choice for certain industries. It is strong, lightweight and weather resistant. But the two factors that have probably caused it to be the most commonly used composite are these: it is extremely versatile and much cheaper to make than most other composites.

Its versatility is due to the very simple concept that a composite is made of combing two different materials, in this case a plastic and a glass fiber. If you know you are wanting a specific outcome, for example it needs to be completely weather resistant and light, you would combine different plastics and glass fibers to say if you wanted a material that was stronger and more flexible.

Equally, once the materials have been combined and the Fiberglass composite has been created, how you then set it or mould it will also differ depending on your own design and requirements.

One of the disadvantages of glass fiber is that it is weaker than some other fibers such as carbon fiber. An individual glass fiber is both stiff and strong but because a typical fiber is long and narrow, it can buckle easily. Because of the way that glass fiber forms, it is stronger in one direction than the other. This can be used to the designer’s advantage as they can determine the look of the end product and therefore the direction the glass fibers need to be lined by which parts need to be the strongest and how the end product is going to be used.

Another way to increase the strength of the Fiberglass composite is by laying multiple layers of fiber on top of one another, with each layer oriented in various preferred directions. Effectively this is allowing you to efficiently predict and create the material’s desired finished stiffness and strength: you are in complete control.

As mentioned above, Fiberglass is one of the most cost-effective composites. We can already see that the end Fiberglass composite is almost completely under the desginer’s control. Thanks to its low cost, they are able to make continuous discoveries and improvements to their design and production. They can play around with new techniques or different plastics to produce better fiberglass. This is just not possible with one of its main rivals Carbon fiber, which can cost a developer 2.5 million dollars just in the machinery fees to produce it.

Fiberglass first had its opening debut during the second world war when they began to build with it in aircrafts as a replacement for the molded plywood that had been used up until then.

Following the conclusion of the second world war it entered into the civilian domain in the production of boats and sports car bodies. In the sporting world of competitive racing they have too since moved on to use carbon fiber instead of glass, as this is much stronger and lighter. As discussed above the production of Fiberglass is much cheaper than that of carbon. It is only in the last couple of decades when the prodction costs of carbon fiber has somewhat reduced that it is now possible to use carbon fiber in things other than the very expensive aerospace industry. It all started with fiberglass and the competitive worlds of sports bikes, racing cars, supercars and sports equipment would not be where it was today with the introduction of fiberglass into all these fields all those years ago.

Fiberglass may now not be the first choice for supercars or sports cars where the tiniest difference in strength and weight can mean victory or loss, it still has other properties which make it the first choice in many industries.

In the house-building industry the malleable nature of fiberglass production makes it an excellent choice for roofing laminates, door and window surrounds, chimneys and many other applications. It is much easier to handle than more traditional materials used in house-building like wood or metal and is more lightweight. Mass-produced fiberglass brick panels can also be used and have the added benefit of providing insulation to reduce heat loss.

Fiberglass also has low signal attenuation properties and RF permeability. This means that it is perfect for use in the telecommuncations industry for shrouding antennas.

There are literally hundreds of uses of fiberglass and it is a composite material that is constantly being improved and explored to create better, more durable and safer materials for use in a wide range of industries.

Thanks to its much lower cost to produce than other composites it has allowed other smaller industries to use it to their advantage. While it may have been over taken in the expensive and ever competitive worlds of sports racing and equipment, it certainly hasn’t been beat in most other fields. You can bet that fiberglass production and manufacturing has a long happy life ahead of it yet.